I love this image that I just came across on The Well Appointed Desk; it combines my love of old technology with some of my favourite authors. 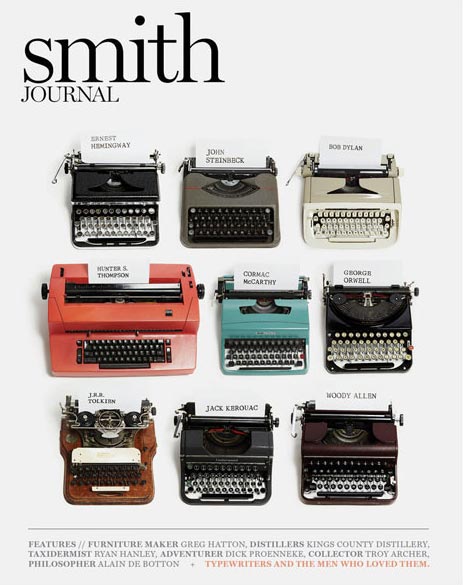 There is one striking omission for me; that of my favourite author William Gibson who wrote the cyberpunk classic Neuromancer on an manual typer writer of 1930s vintage. Of this typewriter William Gibson said:

Neuromancer was written on a “clockwork typewriter,” the very one you may recall glimpsing in Julie Deane’s office in Chiba City.

This machine, a Hermes 2000 manual portable, dates from somewhere in the 1930’s. It’s a very tough and elegant piece of work. Cased, it weighs slightly less than the Macintosh SE/30 I now write on, and is finished in a curious green- and-black “crackle” paint-job, perhaps meant to suggest the covers of an accountant’s ledger.

Its keys are green as well, of celluloid, and the letters and symbols on them are canary yellow. (I once happened to brush the shift-key with the tip of a lit cigarette, dramatically confirming the extreme flammability of this early plastic.)

It amuses me that such a prescient story was written on a typewriter so old it could not be repaired when it broke a short time after Neuromancer was published.

It amuses me even more that I wrote this post using an app that in essence recreates a typewriter on shiny new technology.