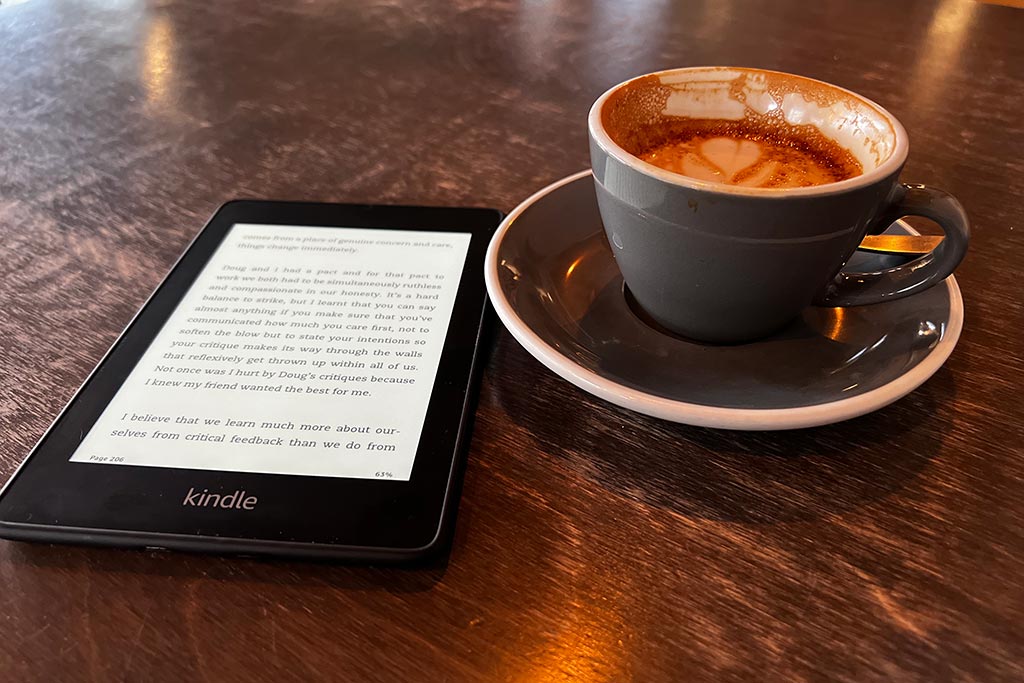 A list of the books I’ve read over the last decade or so, cunningly arranged in the order I read them.

Starred titles are those I highly recommend ☆

Craft: An Argument by Pete Brown — I’m a big fan of Pete Brown’s writing, about beer and beyond. This is probably Pete’s most niche book to date, focussing on what Craft is and what Craft means in relation to Craft Beer. More about Craft than Beer so not just for beer geeks like me.

The Apple Orchard – Pete Brown ☆ — A departure for Pete Brown and for me into the worked of apples, orchards and cider. I always thought of apples as being quintessentially English but they originate from much further afield. A fascinating tale of history, horticulture and society.

The Wind At My Back – Paul Maunder ☆ — I’m not sure how I came across this book but I’m so pleased I did. About cycling, writing and the English countryside this book is a delightful journey in many different ways.

Need For The Bike – Paul Fournell ☆ — Written by French poet and philosopher Paul Fournell this is a series of short essays on meditations on cycling in France and its traditions and culture. Delightful.

Neuromancer – William Gibson ☆ — Re-reading for the nth time as part of ‘Cyberpunk Book Club’ with my good friend Blacknotebook. This is possibly the most influential book published in the late 20th Century; coining the terms cyberspace and Microsoft and influencing everything from the Matrix to Inception and beyond. It feels both utterly contemporary and slightly dated at the same time. William Gibson says of Neuromancer that his one regret is that he didn’t see the rise and prevalence of mobile phones, although that lack of mobiles gives us one of the most memorable moments in the book where an AI makes every payphone ring, just once, as the protagonist passes them walking across the lobby of a hotel.

Pattern Recognition – William Gibson ☆ — Following on from Gibson’s first novel I decided to read one of his later works. Pattern Recognition is the first part of the ‘Blue Ant Trilogy’ which I feel is possibly his best work. Set in modern day London, part of its appeal for me, Pattern Recognition follows ‘Cool Hunter’ Cayce Pollard as she tracks down the maker of the footage – seemly random yet connected video clips being released online. It was interesting reading it again, and right after Neuromancer, the writing is so much more fluid and mature yet still full of amazingly prescient ideas and themes.

The Meaning In The Making – Sean Tucker ☆ — I’m a huge fan of Sean Tucker’s YouTube channel, ostensibly about photography but seen through the eyes of a modern day philosopher. Sean’s first book The Meaning In The Making builds on this philosophical approach and presents a series of essays to help ‘makers’ make work that matters to them and to others. Thought provoking and highly recommended.

Can’t Hurt Me – David Goggins ☆ — I never thought I’d read a book by an ex-Navy Seal and Ultra Marathon runner, but YouTube’s algorithm suggested a video featuring David Goggins and I was hooked. Can’t Hurt Me is 80% autobiography and 20% motivational/self-improvement, and it’s a captivating read. David is brutally honest about his tough early life and the mistakes he’s made in his adult life and military career. If you want an idea of what it takes to complete the three toughest elite military selections and then run hundreds of miles with broken bones (really) read this.

Mindfulness For Mere Mortals – Patrick Rhone — A short, but interesting read exploring the benefits of mindfulness and outlining how to start meditating and build a regular practice.

Enough – Patrick Rhone — A collection of essays on the subject of what is enough, for you. Tools and strategies to find what is enough for you right now and provide the flexibility to adjust as the conditions change. A thought provoking reminder.

A Christmas Carol – Charles Dickens — I hadn’t read and Dickens until I read A Christmas Carol a few years ago and then understood why he’s so highly regarded. The story we all know I’m sure, but reading it in Dickens’ prose is a treat. This passage makes me smile every time I read it.

They were a gloomy suite of rooms, in a lowering pile of building up a yard, where it had so little business to be, that one could scarcely help fancying it must have run there when it was a young house, playing at hide-and-seek with other houses, and have forgotten the way out again.

The Great Alone by Tim Voors ☆ — A Christmas present from my son, The Great Alone describes Voors’ six month journey as he walks the 2650 mile Pacific Crest Trail from Campo on the Mexican Border to Manning Park on the border with Canada. An extraordinary story beautifully told and illustrated by Voors.

10% Happier by Dan Harris ☆ — Dan Harris was an almost stereotypical American news anchor until he had a panic attack live on air. In 10% Happier Harris describes his journey from war zones to silent mediation retreats via that panic attack and some of the more ‘colourful’ religious experiences the USA has to offer. A very genuine and accessible introduction to meditation and the benefits it can bring.

Ghost Rider by Neal Peart ☆ — Peart’s moving memoir following the loss of his daughter and wife within ten months of each other. Following this awful loss Peart took to the road on his motorcycle, ultimately covering 55,000 miles from Canada, through America and Mexico to Belize. Beautifully written, at times heart rending, but ultimately uplifting.

Longitude by Dava Sobel — Describes the decades long competition to create a tool or technique to accurately determine longitude. Perhaps unsurprisingly this is a little dry, but intriguing nonetheless.

Raw Spirit by Iain Banks ☆ — Yes that Iain Banks. I stumbled across this in a bookshop in Horsham a few summers ago, a perfect demonstration of why books shops will always be wonderful places for serendipitous discoveries. A beautifully written travelogue and journal of Banks’ travels around Scotland in search of the perfect dram.

Pie Fidelity by Pete Brown ☆ — I’m a big fan of Pete Brown’s beer writing and his first foray into food writing doesn’t disappoint. Pie Fidelity sings the praises of British Food, an often unfairly maligned cuisine, and makes a brilliant case that historically we have not done enough to protect our national dishes and food heritage in the way the French have for example. Pete weaves in fascinating stories throughout the book, and describes the link between family and food wonderfully. You’ll never think about a bacon roll in the same way again.

The Little History of Cornwall by Paul Wreyford — Cornwall is one of my favourite places, so thought I’d learn a little more about the County I love. This book is a collection of short, sometimes very short, passages about aspects of Cornwall’s history. Initially fun and accessible, but often I was left wanting more detail. It did however further cement my love of Cornwall and strengthen my pride in my Celtic roots.

The Swordfish And The Star by Gavin Knight — Continuing my literary exploration of Cornwall, The Swordfish and The Star – named after two Newlyn pubs favoured by the local fishermen – describes life on the rugged Penwith Peninsula and the sea around it. Much of the book appears to be transcriptions of interviews with fishermen and artists, which is a shame as the passages of Knight’s prose read very well, or maybe it’s just their contrast to the choppy text from the interviews. Initially fascinating, but the final quarter of the books seems to lose its structure and flow and becomes difficult to follow a times.

A Song For The Dark Times by Ian Rankin — The new Rebus novel has become an annual tradition over the last few years as Rankin tracks Rebus’ life and career in real time. Rebus is now retired but Rankin still managed to create an investigation for him. A little slow to start but builds momentum into acts 2 and 3.

Knots And Crosses by Ian Rankin — Having enjoyed the new Rebus I thought it was time to re-read them all. I discovered Rebus when I first started commuting into London in 2003. A colleague at Amex introduced me and we bought and shared all the available books. Re-reading Knots and Crosses has brought back lots of good memories.

Hide And Seek by Ian Rankin — I have a bad memory, but apparently not as bad as I thought, which is presenting a problem with re-reading the Rebus books. Not far into Hide And Seek I started to remember the plot and sadly ‘whodunnit’. I kept reading as it was interesting to revisit early Rebus, it was also interesting that my mental images of characters and locations was exactly the same as the first time I read it. I’ll wait a while longer before I read any more Rebus I think.

Serpentine by Philip Pullman — A short story originally written in 2004 for a National Theatre fund-raising event, Serpentine is spookily prescient of developments in the The Secret Commonwealth. All too brief but good to be reacquainted with Lyra Silvertongue and The North.

The Spy And The Traitor By Ben Macintyre ☆ — I started this in the summer, got about half way through but then stoped reading it for some reason. Today I picked it back up and couldn’t put it down until I finished it. A brilliantly written account of the life and incredible escape from the USSR of KGB double agent Oleg Gordievsky. As tense and well written as a Le Carré thriller.