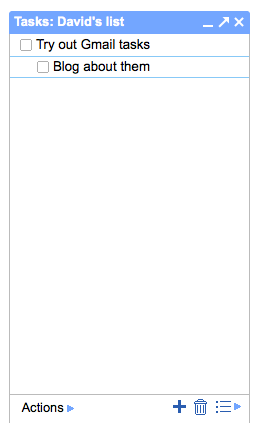 You may have seen the news that Google has added a tasks application to its Gmail email service.Well the even better news is that since they recently added Google Labs to Google Apps email I get to play with it also.

I’ve tried a number of task apps over the years and not found one that I could stick with and met my varied but rather basic needs but tasks from Google looks promising.

I like that it is in my email but can also be “popped out” to float as it’s own window.

I like that because it is web based I can access from both my iMac and my Samsung NC10 running XP.

I like that you can easily make an email a task; most of my tasks seem to arrive via email.

I really like its simplicity: tasks, sub tasks, due dates and that’s about it.

I rather hope that Google don’t develop it much further than this, but if they do they make new features configurable. I’ve been put off other task applications by the complexity or multiple stages of simply adding a task and would hate to see that happen here.

I love the almost constant upgrades and additions that Google makes to its services such as Gmail, Docs, Google Apps etc. particularly when you consider they are all free.