Recently I decided to take this blog a little more seriously, and part of that has been to see where my visitors were coming from and to try and increase my visitor numbers.

Google Analytics reports that 57% of the visitors to david hughes.org arrived from a search engine: 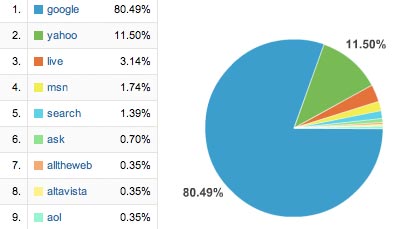 That’s a HUGE proportion from Google, but looking at the detail I found that the vast majority were from Google.com. I live in England so Google insists on sending me to Google .co.uk no matter if I enter .com or not so I found it interesting that I should get so much traffic from .com and so little from .co.uk.

I found that when searching for david hughes my blog ranked #10 on Google.com and #1 on Yahoo.com. However it was another story when you looked at the UK version of the search engines that UK users are pushed to. On Yahoo.co.uk I was a very pleasant 3, but on Google.co.uk I struggled to find my site; after wading through search results I finally found it at #212.

I found this disparity in rankings surprising; it’s the same site with the same content so I really couldn’t see why it would rank well on google.com and not on google.co.uk. It was this dramatic difference that made me take an more active interest in my site’s ranking.

The first thing I learnt was that nobody except Google really knows how their algorithm works despite what some might tell you. So really we’re all experimenting and seeing what works; which makes it a little frustrating but also kinda fun.

The first thing I wanted to explore was the difference in rankings between .com and .co.uk. Looking into this subject it seems that the physical location of your website and its domain make a difference to how Google rank you on the country specific sites.

I moved davidhughes.org to a UK based server and saw a small improvement, but moving to a UK domain name proved more difficult. The .org TLD is classified as being international and this seems to make Google rank it well on .com but rank it lower on .co.uk because it is not a UK domain.

I tried to buy davidhughes.co.uk and david-hughes.co.uk but both have been bought by cyber squatters who wanted £1500 and £2500 + VAT respectively. I wish them luck as I’m not aware of a famous David Hughes that would pay that – we’re not talking about britneyspears.co.uk here.

Unsurprisingly, I decided to stay with davidhughes.org and work at building up the Google ranking for this domain.

The next thing I looked at was keywords or the words that people will use to search for and find my site. The keywords I most want people to be able to find my site via are david hughes; obvious but also rather common. I realised that David Hughes only appeared once on this site, in the header, so my keyword density was about as low as it could be. To help this I added a written by byline to all of the articles and updated the copyright statement to include my name; this added ten more instances of david hughes to the homepage. At this time I also wrapped main David Hughes in <h1> tags as this is good both from a semantic standpoint, rather sloppy of me not to have done so, and apparently Google likes headings.

This is really the extent of the technical changes I have made to my site; they did help but not as much as the final elements: links and content.

From all I read it seems the biggest single influencer on your Google ranking is incoming links. There are two ways I can see to get links to your site: go out and comment on other blogs and site and link back to your own site and for other sites to link to your site and articles.

The biggest factor in getting that to happen is of course content; if you don’t have content of interest to people they aren’t really going to link to you are they? I will admit to not having seen a rise in people linking to my site but I have seen an increase in visitors from links that I have published.

Apparently Google also like frequently updated content so I have tried to be a little less sporadic in my posting but as this coincides with my desire to do more with this blog it’s no bad thing.

So where has this focus on my Google ranking ended up?

When I started davidhughes.org was ranked #212 as I said earlier; it peaked at #65 but has since slid back to #94. I have no idea why my ranking has fallen back – that’s another Google mystery to solve.

A move from #212 to #65 in just over a month isn’t bad really is it? It’s not the front page where I’d really like to be but it does show that it is possible to improve with a few basic changes.

Anyway, back to the Google grindstone.