The Guardian has been prevented from reporting parliamentary proceedings on legal grounds which appear to call into question privileges guaranteeing free speech established under the 1688 Bill of Rights.

Today’s published Commons order papers contain a question to be answered by a minister later this week. The Guardian is prevented from identifying the MP who has asked the question, what the question is, which minister might answer it, or where the question is to be found.

The Guardian is also forbidden from telling its readers why the paper is prevented – for the first time in memory – from reporting parliament. Legal obstacles, which cannot be identified, involve proceedings, which cannot be mentioned, on behalf of a client who must remain secret.

The only fact the Guardian can report is that the case involves the London solicitors Carter-Ruck, who specialise in suing the media for clients, who include individuals or global corporations.

Reading The Spectator and The Third Estate it seems this is the question that The Guardian is being prevented from reporting:

61 N: Paul Farrelly (Newcastle-under-Lyme): To ask the Secretary of State for Justice, what assessment he has made of the effectiveness of legislation to protect (a) whistleblowers and (b) press freedom following the injunctions obtained in the High Court by (i) Barclays and Freshfields solicitors on 19 March 2009 on the publication of internal Barclays reports documenting alleged tax avoidance schemes and (ii) Trafigura and Carter-Ruck solicitors on 11 September 2009 on the publication of the Minton report on the alleged dumping of toxic waste in the Ivory Coast, commissioned by Trafigura.

This would seem to be the report that Carter-Ruck are trying to supress.

It’s hard to belive that we, in the UK, still live in a democracy and not some kind of Orwellian state controlled not by Big Brother, but by Big Business.

But it’s also pleasing to see how quickly and widely this story has spread through the ‘blogosphere’, and that as of writing the top trends on Twitter currently include: Guardian, Cart-Ruck, Trafigura and #carterruck. 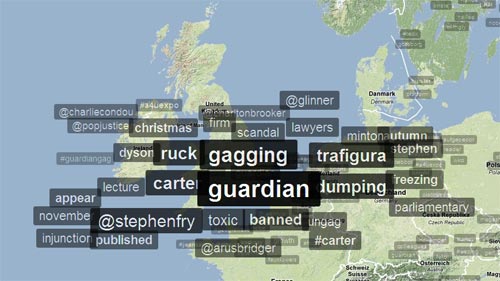