A week today my friend Richard Wiggins and I will be hosting the first ever MK Geek Night – a new, FREE, Milton Keynes based event for the creative industries. 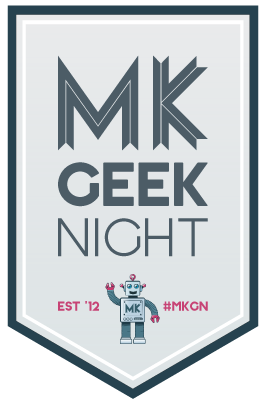 We’ve attended the excellent Oxford Geek Night a few times, and this inspired Richard to do something similar for Milton Keynes.

Now Richard claims he asked me directly to get involved, but I can’t say I remember this, of course that might have been because it was over a beer or more, but after a few chats and questions I was suddenly one of the organisers.

We originally thought the event would be a small meet up in a pub, with a local speaker or two, but as we chatted and planned the scope grew. This may or may not have been my fault.

We thought we’d aim high and see what happens, so we drew up a list of the speakers we’ve loved seeing speak and started approaching them. So far everyone we have approached has said yes; to say we’re blown away is an understatement – we now have amazing speakers booked up for our first four events.

The first MK Geek Night will feature the incomparable Jon Hicks and Brendan Dawes. I know! And you can see them speak for FREE.

Our biggest challenge turned out to be finding the right venue. As we had such great speakers a pub really wasn’t going to work, and we didn’t want to hold it in a soulless ‘function room’. Then Richard found The Buszy a fabulous new community art space over the old Milton Keynes bus station. The Buszy has everything we need, is in a great location for those travelling from inside and outside of Milton Keynes and can accommodate up to 200 people.

200 people! How did we go from a small meet up in a pub to an event with top line speakers and an audience of almost 200? As I type this there is a small number of tickets still available – reserve yours now.

We’ve been able to make MK Geek Night a free event due to the generous support of some great companies. If you’d like to support future MK Geek Nights please get in touch.

So, one week to go, a line up of amazing speakers and an audience of almost 200… gulp!

I’ll admit I’m a little nervous, but I’m also incredibly excited – MK Geek Night is going to be a fantastic night, I hope you can join us there.