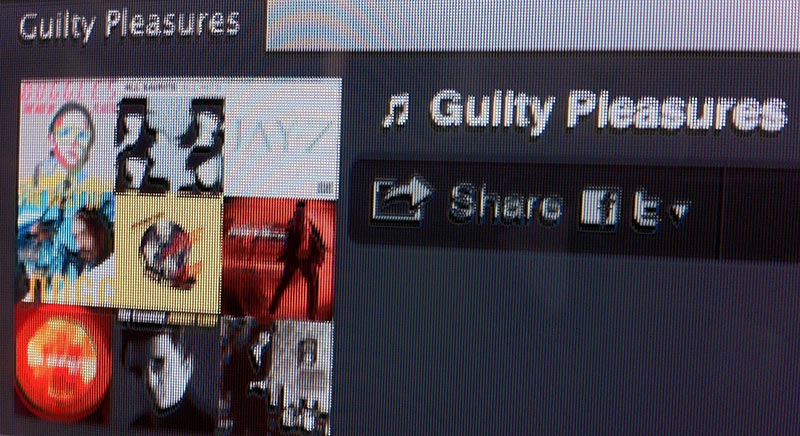 Inspired by my old friend Simon, and my new friend Cole I thought I’d share my musical guilty pleasures with you.

Like Simon and Cole I have exquisitely perfect taste in music – I mean truly excellent taste.

And like my friends I have those tracks lurking in my iTunes Library that I enjoy, and even love, but aren’t perhaps as ‘cool’ as the others.

So here for your listening pleasure, and musical delectation are my guilty pleasures:

Video Killed The Radio Star – The Buggles The first video played on MTV and the first track in my guilty pleasures playlist. This a childhood favourite that I enjoyed then for its novelty, but now appreciate for it’s pop artistry. I sit waiting for that kick drum to arrive around 30 seconds in, and smile each time.

Hasan Al Sabah – Hawkwind (video) This track is ridiculous and lightly rubbish, but I love it for that and for an associated memory. When my chum CJ first travelled the Indian sub-continent he sent me a series of very funny letters. My favourite was one that was simply the chorus from this song, which repeats the word hasheesh, followed by “Subtle Huh”. What could it have meant…

Under The Bridge – All Saints I love the original Chilli Peppers version of this but a true guilty pleasure must be a rock band covered by a girl band. I gotta say their version is flippin’ great. I remember seeing the video for it at the cinema as a short preceding the main film; which I think was Pulp Fiction of all things.

99 Problems – Jay Zed Yeah it’s a tad misogynistic, but I can’t help myself. Hard not to love that rocking backing track, and the verses where he deals with the racist cop.

James Bond Theme – John Barry Come on… all boys love this piece of music… don’t they? Haven’t we all had a little Bond fantasy moment when its come on in the car? No? Just me? Well they are my guilty pleasures! For a piece of music 1′ 48″ seconds long it’s had a heck of impact I think. I also highly recommend the brilliant ska version by the Skatalites which they some how extend to 7 minutes.

Ghost Riders In The Sky – Johnny Cash This is an odd one. I hate country music, it makes me feel physically ill, but I can’t help but like this track.

Always Find Me In The Kitchen At Parties – Jona Lewie Another childhood memory and a sentiment I came to sympathise with in my teens. But like Mr Lewie I met a girl to dance with in a “new way” and I’ve done my time in the kitchen at parties.

Band On The Run – Paul McCartney and Wings The whole Band On The Run album is a guilty pleasure for me. I remember the cover as a kid and the album has been with me ever since. The original Wings track isn’t on Spotify so the link is to a Foo Fighters cover which is predictably brilliant.

Cocktails For Two – Spike Jones Yet another track I cam across as a child; my Dad had the most wide ranging record collection I’ve seen. This track is silly, funny but very clever. If you don’t smile once listening to this seek help.

My Friends – Johnny Depp David Hughes in show tune shock! I loathe musicals I really do, but I went to see Tim Burton’s Sweeney Todd and really enjoyed it. Yes I was surprised too. The music and lyrics are in many places really clever, and the story is wonderfully dark – not a hint of Sound Of Music or Wizard Of Oz here. This track is a particular favourite with the two singers moving in and out of each other in a musical spiral; one light and positive the other dark and brooding. Johnny Depp sounds like a mix between David Bowie and Keith Richards; although if you really want to him channel Bowie listen to the opening track London.

The Futures So Bright, I Gotta Wear Shades Another novelty record and another memory. Towards the end of my 6th form I was chatting to a friend I worked with in my evening job at Comet, who upon hearing my plans exclaimed that “my future was so bright I’d need to wear shades”. It would seem he was overly optimistic perhaps.

Summertime – Jazzy Jeff and The Fresh Prince The ultimate summer pop song. I need say no more than that.

The Chain – Fleetwood Mac I’m not a Fleetwood Mac fan, but own and like the Rumours album. I love this track and freely admit I wait for the moment about 3 minutes in when the wonderful bass line kicks in, and I imagine I can hear Murray Walker and James Hunt in the background.

Bullet The Blue Sky – U2 Like Simon I’m far from a U2 fan, but I love this track. The drummer in full Bonzo mode and the Edge’s searing guitar over the top. I can hear those fighter planes…

Supersonic – Oasis (video) And like Cole I never really got Oasis, but again love Wonderwall. However I thought I’d include Supersonic as it sums up their simianly swaggering sound, and I love that intro.

Mr Blue Sky – ELO Last and by no means least Mr Blue Sky; a guilty pleasure shared by Simon and I. This is the perfect feel good song. It is wonderfully eccentric and English right down to the last “Mr Blue Sky”.

There you have my guilty pleasures laid bare for your perusal and enjoyment.

Have a listen over at Spotify.