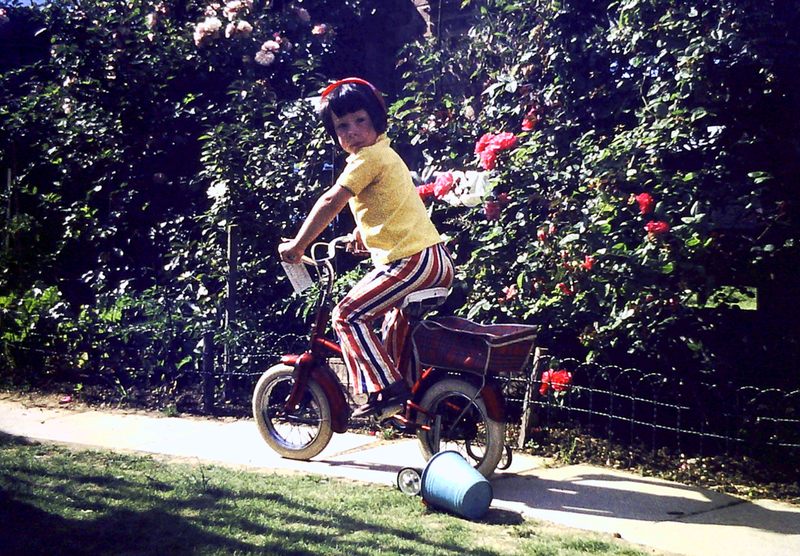 This is me on my first bicycle, a fourth birthday present and probably the last time I’ll get away with wearing a yellow jersey, not to mention those rather fabulous trousers.

I remember a number of other bikes from my childhood: a second hand bike that my Grandfather restored and hand painted blue and white,  a Raleigh Commando from my Mum’s Kays catalogue and a series of bikes from now defunct UK manufacturer Viscount Cycles.

Two bikes of note from my Viscount era were a BMX manufactured by Shimano, yes that Shimano, and my first proper ‘racer’: a bright red, 10 speed, steel framed beauty. I remember thinking the rubber hoods on the brake leavers were the coolest thing ever — nobody else in the village had those. A quick rummage around the internet suggests it was probably a Grand Prix or Gran Sport.

As a child and a teenager we rode our bikes all the time. We’d get in from school, go straight out, come back for tea, go out again and then only come back in when we absolutely had to. In the summer holidays we rode so much I had calluses on my hands.

But I grew up and put away childish things, or so I thought, and moved onto what I then considered were ‘real bikes’: ones with engines. I learnt to ride on a Kawasaki KMX 125, then progressed to a Yamaha RD 350 YPVS F2, a Yamaha TDR 250 and finally a Honda CBR 600. Sadly a motor biking friend  had a very nasty accident, I gave into family pressure, sold my bike and bought a car.

Obviously I was still feeling the need for two wheeled action, and the future Mrs Hughes and I both bought mountain bikes. I had a pearlescent white Diamond Back Topanga which I rode often, both on and off-road. We then started a family and for a reason I cannot remember the Topanga went to my Step-Father who still has it to this day.

Our garage was broken into and my Rockhopper went to the big car boot sale in the sky. Our insurance company sent me a Specialized Hardrock as a replacement. I thought the first bike was too big so exchanged it for the next size down — this was a mistake. I didn’t find the bike comfortable, I didn’t like the disc brakes I had thought were so cool, and so I rode it no more than a few times for a few miles with the kids.

As I’m sure you’ve noticed cycling has grown in popularity in recent years. Cycling is the new golf we’re told and a new species has been created — the MAMiL. I have a number of friends who are very keen cyclists and they naturally took to chatting about cycling on Twitter and elsewhere. Even with this peer group influence, I still didn’t get cycling, I didn’t understand their passion and obsession, and may have grumbled and muttered to that effect on occasion. Ahem.

Being tall and leading a ‘sedentary life style’ I have always had back trouble, and in February 2013 my luck ran out and I ruptured two discs in my lower spine. I’ve not experienced pain like it, and the weeks that followed were pretty tough.

The ruptured discs were pressing on nerves which initially gave me excruciating sciatica followed by issues with strength and sensation in my right lower leg and foot. Not being able to feel my foot or able to lift my toes was rather scary. Of course not being able to move my toes made walking very difficult so my meagre level fitness slipped further.

I saw a specialist who thought I’d need surgery but that we should start with a guided nerve root block, which is an x-ray guided injection into the affected nerves. I didn’t want needles or blades anywhere near my spine so I continued with extensive physiotherapy which luckily began to work well for me.

I knew following this that I had to get fitter, and discussed the best exercise with my Doctor and Physio – they both recommended cycling. There was no escape.

With my mountain bike being too small I was worried about aggravating the damaged discs again, so I purchased a correctly fitted and more road oriented hybrid Trek FX 7.4. 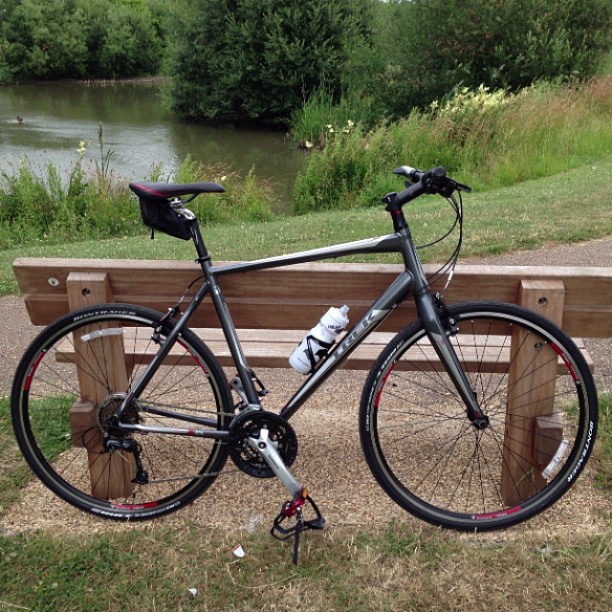 I thought about buying a true road bike, or racer as we used to call them, but was concerned that my back would not cope with the drop bar riding position. Given that I bought a full on road bike just a few months later some might question my decision, but I don’t think I’d have felt as comfortable in every sense on a road bike.

I remember the first proper ride on the Trek; it was the height of summer, sunny and in the mid 30s and my  lack of fitness was brought home to me in no uncertain terms.

But I loved it – I finally got cycling.

I  began to understand the obsessive nature of cyclists or so I thought – little did I know that I was just scraping the surface. I have always wanted a hobby that involved ‘gear’ but I had no idea quite how much ‘gear’ you need for cycling in the varied weather patterns of the UK – more of which in the future.

I slowly increased my mileage, determined not to overdo it and so put myself off. I quickly learnt why lycra and ‘padded pants’ are so important, and  made the move to proper cycling clothing. At the same I took the plunge and went for cycling shoes and clipless pedals, which are fabulous and scary in equal measure – still.

As I went further I started struggling with numb hands and aching wrists, one of which I had broken in one of many motor cycle accidents, and wished for the multiple positions that drop bars would afford.

Then I received an email from my local bike shop Corley Cycles announcing their end of season sale, maybe here was a chance to pick up a bargain road bike. I went to look at a Specialized Secteur with 58cm frame and I found that I need a 61cm. The only bike they had in that size was a Specialized Roubaix, a carbon framed road bike, which I decided I’d try out just for size.

As the chap wheeled it outI knew I was in trouble – it was matte black with refreshingly minimal graphics. I rode it and loved it. 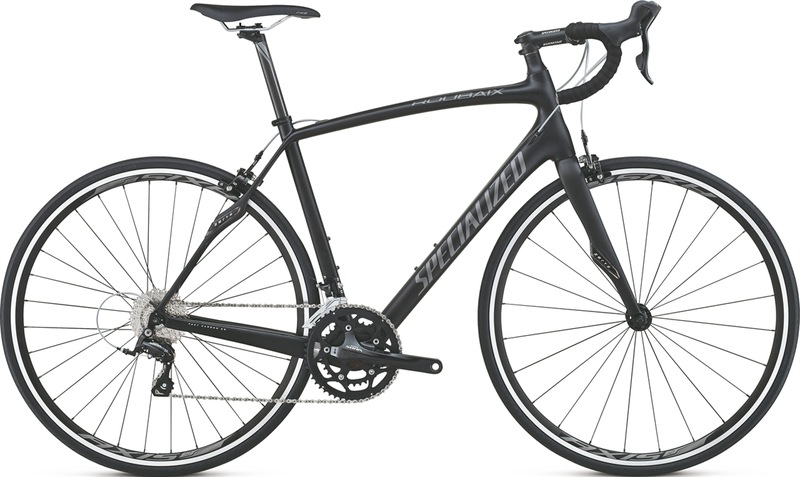 Being a 2014 specification model it wasn’t in the sale, but a quick deal was done and the order was placed.

The Roubaix has transformed my cycling; it’s faster, and more comfortable than the Trek – it’s a  joy to ride. Last weekend I completed my longest ride so far, at just over 25 miles. I realise to most cyclists this is nothing, but given I was having trouble walking in the first half of the year I was rather proud.

Whilst I intend to cycle as much as I can through the winter, I long for spring and summer, and for the warmer, lighter days they will bring.

My name is David and I’m a cyclist.