On this day my thoughts return to the events of September 11 2001. This year they are more sharply focussed having recently returned from my first trip to New York. 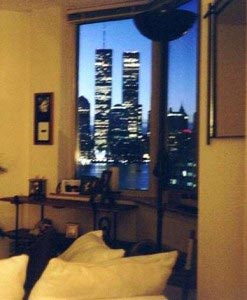 I’m still left open mouthed and shocked every time I see footage of the planes hitting the towers and the buildings collapse. When I visited Ground Zero I was surprised that I didn’t feel more emotional. I’d expected to be moved by the site, but instead it just felt like a large building site; which amazingly eight years later it still is. What is amazing is just how big an area it is, and that so few of the surrounding buildings were destroyed.

I did have one moment in New York that really brought 9/11 back to me. I was standing the lobby of my hotel when a classic American fire truck roared past with its sirens blaring trailing a huge American flag. It made me think of similar footage I’d seen of the fire crews rushing to the towers and of course how many of them died there as well. It sent the hairs in back of my neck on end and a shiver down my spine.

My thoughts today are with the familes of those that lost loved ones.

The photo was taken by a friend from American Express at 6 am on 9/11. She was leaving for work in the World Finance Centre, next door to the World Trade Centre, and was struck by how beautiful the towers looked.